Child murderer. Dream demon. The bastard son of a hundred maniacs. Any way you slice it, there can be only one man, one monster, who epitomizes those words: Freddy Krueger.

First introduced to hungry horror audiences in the fall of 1984, A Nightmare on Elm Street quickly cemented itself as a new breed of genre film—terrifying, imaginative, slick and, above all, smart. In a very distinct way, the movie would breach the tenuous boundary that separated dreams from reality, taking audiences on a rollercoaster ride that was simultaneously shocking and seductive. Slashing his way through the dreams of on-screen victims, Krueger creator Wes Craven unwittingly unleashed an American cinematic icon into the lives of moviegoers around the world.

A Nightmare on Elm Street would mark the beginning of an era in horror where a movie villain was as horrific as he was exhilarating; a charismatic killer whom audiences feared and cheered. Fading away were the days when sex, stalk and slash were the staple of teenage terror. Instead, audiences found the prototypical mute, lumbering monstrosities normally relegated to out-of-the-way places, and who dealt death in ways that only served to push the limits of on-screen gore, replaced with a more immediate, relatable fear in their own bedroom. It was a riveting, elevated and new twist on an old formula in the never-ending mixture of morality and terror: a horribly burned, vengeful figure with knives for fingers, who personified the evils of men and reminded all good little girls and boys that the sins of the past are never forgiven. That closing your eyes and hiding under the covers is the last place to seek refuge, for this movie monster could get you where none ever could before—in the deep, dark recesses of your own psyche. Paradoxically, the film also offered a striking notion of hope: by turning our backs on demons and darkness, we are able to reclaim the power within and realize life can truly be a beautiful dream. At least until the sequel. 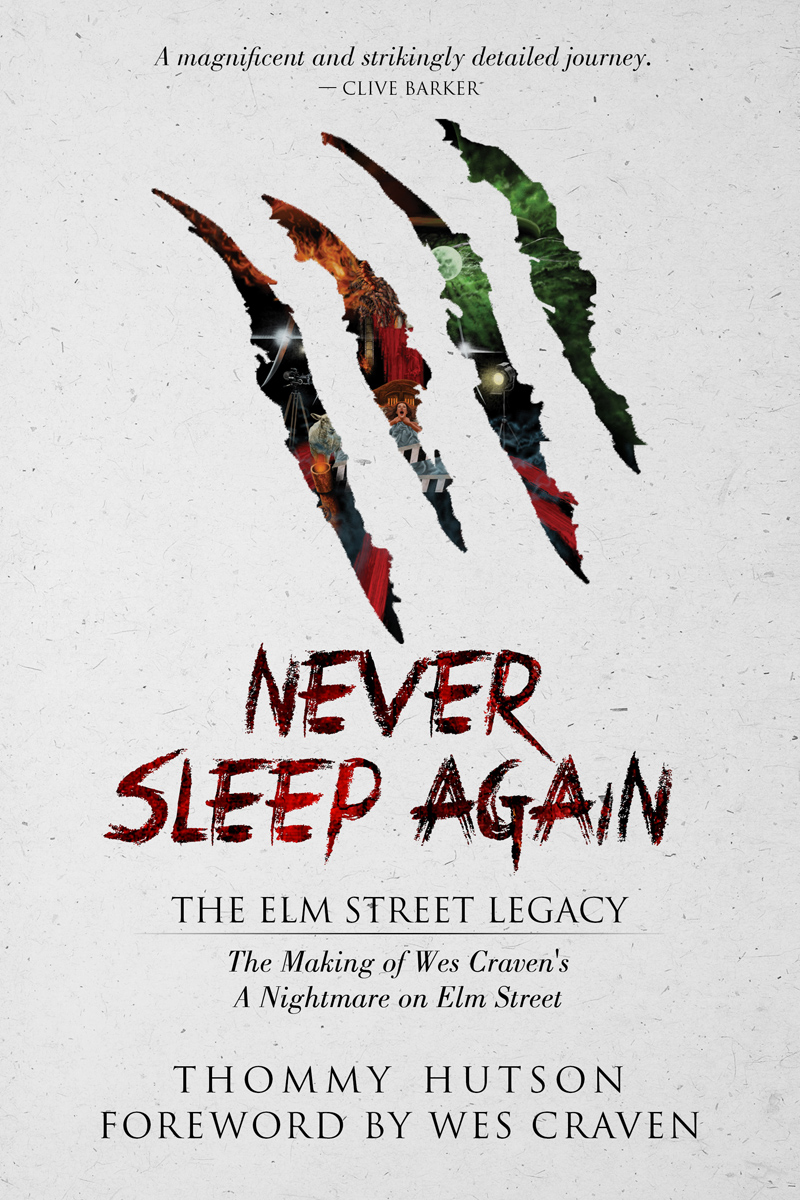 Never Sleep Again: The Elm Street Legacy—The Making of Wes Craven’s A Nightmare on Elm Street is the ultimate chronicle of the writer and director’s scary, thrilling and innovative film. Author Thommy Hutson takes readers deeper into the boiler room than they’ve ever dared go, from exploring what spurred mastermind Craven to create his watershed film to the beginnings of Robert Shaye’s revolutionary New Line Cinema, and learning how the cast and crew brought their worst nightmares to life. Pieced together with dozens of exclusive new cast and crew interviews, in addition to thoughts from those who have worked with Craven and Shaye prior to their Nightmare, it’s a tale fashioned from the words of those who lived it. Including rare and never-before-seen materials, this extensively researched, cleverly crafted, comprehensive look back is the definitive account of the film that began what many have called the best, most frightening and imaginative horror franchise in motion picture history.